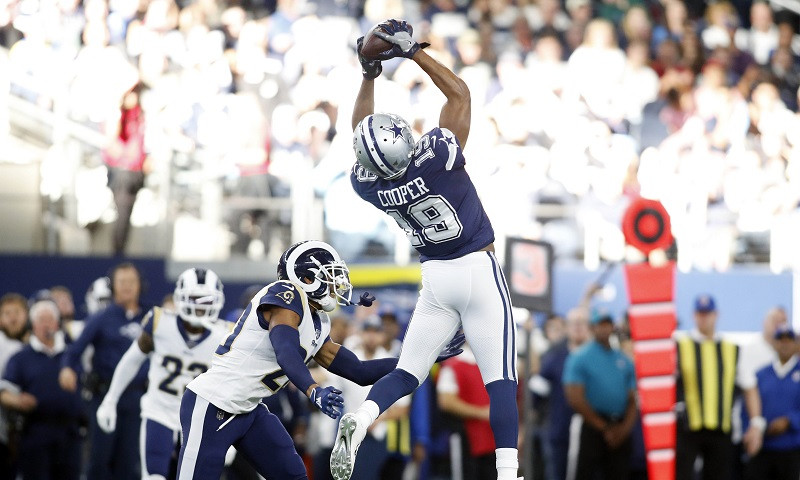 The NFL free agency period began Monday, and it didn’t take long for a blockbuster trade to happen. Things have gotten even more interesting early Tuesday morning. Stay up to date on all of the biggest moves in the NFL, as well as their NFL DFS and sports betting implications. We’ll update this page throughout the offseason.

Detroit Lions sign WR Geronimo Allison – The Packers hoped Allison would have a big season in 2019, but the young receiver struggled in the slot. Allison will stay in the NFC North, signing a one-year deal with the Detroit Lions.

Kansas City Chiefs re-sign WR Demarcus Robinson – Demarcus Robinson didn’t put up huge numbers, but he has had a few huge games over the last two seasons. In Week 2, with Tyreek Hill sidelined, Robinson posted 172 receiving yards and two touchdowns. Chiefs receivers like Robinson and Mecole Hardman are contrarian options for Chiefs DFS stacks in both traditional and Showdown formats.

WR Robby Anderson joins Panthers – Anderson is leaving the Jets to join the Carolina Panthers. Anderson has had some huge DFS games over the years, and will be a welcomed to addition for new Panthers QB, Teddy Bridgewater.

Packers sign Devin Funchess – Funchess played one game for the Indianapolis Colts in 2019 before breaking his collarbone. The Packers hope Funchess will help add some much-needed depth at the wide receiver position. Look for the Packers to add another receiver or two, either via free agency or the 2020 NFL Draft.

Panthers sign XFL quarterback PJ Walker- Leading the highest-scoring offense in the XFL, Walker was the odds-on favorite to win XFL Player of the Year before the season was abruptly canceled due to the coronavirus pandemic. This arguably has a larger affect on next year’s XFL DFS than NFL.

Chiefs sign XFL quarterback Jordan Ta’amu – Ta’mu went undrafted after his time at Ole Miss in 2019, but the dual-threat quarterback proved enough during his short time in the XFL to land an NFL contract.

Cardinals keep Kenyan Drake – The Cardinals traded for Drake before the 2019 trade deadline, and they liked what they saw. Drake had two massive DFS games towards the end of the season, even finding himself on Week 15’s winning DraftKings Millionaire Maker lineup. Drake will be a player you can use to have more contrarian Arizona Cardinals stacks in 2020.

Emmanuel Sanders joins Saints – The Saints added a weapon for Drew Brees. This will likely take away some of Michael Thomas’ targets, but it is a major addition for this offense.

Melvin Gordon signs with the Denver Broncos – Gordon is set to go head-to-head with his former team, the Los Angeles Chargers, after signing a two-year, $16 million deal with the Denver Broncos. Gordon’s 2019 holdout didn’t go as planned, and now the running back is signing for less than the Chargers offered him last season.

Tom Brady officially signs with the Tampa Bay Buccaneers – The Buccaneers and Brady make it official Friday morning. Now we just need to fast forward to Week 1 so we can cash in our free agency bet. While many people are excited to see the Buccaneers offense with Brady as its centerpiece, I think DFSers should tread lightly when looking at Buccaneers receivers, Mike Evans and Chris Godwin. Both receivers benefited from Jameis Winston volatility, and the Buccaneers often had to play from behind due to Winston’s turnovers.

Todd Gurley signs with Falcons – Former Georgia Bulldog star his heading after being released by the Los Angeles Rams.

Rams release Todd Gurley – Less than two years after signing the running back to a $60 million, four-year contract ($45 million guaranteed), the Los Angeles Rams have released Todd Gurley. Gurley led the league in touchdowns in 2017 and 2018, but was hindered by injuries in the 2018 playoffs and throughout the 2019 season. Good for the Rams for understanding sunk costs. Now we have to wait and see where the former star running back will play in 2020. One potential landing spot is in Tampa Bay, but the Buccaneers might prefer Melvin Gordon. We’ll keep you updated as more news comes out.

Chicago Bears trade for QB Nick Foles – Though it was speculated that the Chicago Bears might bring in Cam Newton, the Bears opted to trade Nick Foles for a 2020 fourth-round pick. Foles will compete with Mitch Trubisky for the starting job, as the former No. 2 overall draft pick has lost the confidence of the Bears front office. The Jaguars now have 12 picks in this year’s draft.

Tom Brady announces his departure from the New England Patriots – This isn’t a signing, yet, but we do know one team that Brady won’t be playing for. Brady announced the first part of his decision on Instagram early Tuesday morning after declining an offer from Bill Belichick and the New England Patriots. On Wednesday, Brady will become an unrestricted free agent for the first time in his career. Where will Brady end up? I gave my pick before NFL free agency kicked off. It’s starting to look more and more like the Buccaneers.

Dallas Cowboys re-sign WR Amari Cooper – For a minute it looked like the Cowboys were losing cornerback Byron Jones and receivers Amari Cooper and Randall Cobb. Luckily for Cowboys fans, Cooper reportedly turned down a huge offer from the Washington Redskins and will remain in Dallas for a cheaper contract. This is great for the Cowboys, who just franchise-tagged quarterback Dak Prescott. The Cowboys didn’t make the playoffs in 2019-20, but they did have one of the most prolific offenses. For DFS purposes, Prescott and Cooper both have high ceilings when Cooper is healthy. We saw Prescott-Cooper stacks take down several GPPs early in 2019. Look to stack the two together again in 2020.

Carolina Panthers reportedly finalizing deal with QB Teddy Bridgewater – More to come on this. The biggest question, obviously, is where will Cam Newton be playing in Week 1?

Indianapolis Colts sign Philip Rivers – Predictably, the Colts signed the veteran quarterback Philip Rivers. The writing was on the wall as soon as the Colts traded away their 13th-overall pick in the 2020 NFL draft.

Raiders sign TE Jason Witten – This won’t mean much for DFSers. The Raiders extended Darren Waller’s contract last fall. Waller will continue to be getting the bulk of snaps and remain the primary pass-catcher at this position.

Drew Brees signs two-year contract with Saints – Brees will be in New Orleans for at least two more years, making $25 million a year. So yes, Michael Thomas will continue to be a PPR machine.

Houston Texans trade DeAndre Hopkins to the Arizona Cardinals – Texans head coach/GM Bill O’Brien did it again…O’Brien makes another highly questionable move, trading wide receiver DeAndre Hopkins and a fourth-round pick to the Arizona Cardinals for running back David Johnson and a 2020 second-round draft pick. Find out more about the trade and how it impacts sports betting and NFL DFS here.

Minnesota Vikings trade Stefon Diggs to Bills – Stefon Diggs was disgruntled in Minnesota as Kirk Cousins struggled early in 2019. Vikings made sure that won’t be the case in 2020, trading away the receiver and a seventh-round pick for 2020 first-, fifth-, and sixth-round picks, plus a 2021 fourth-round pick.

49ers trade DT DeForest Buckner to Colts – Colts gave the 13th-overall pick in the 2020 NFL draft to the 49ers for the defensive tackle. This likely means the Colts will pursue Philip Rivers in free agency.

Browns sign TE Austin Hooper, Falcons trade for Ravens TE Hayden Hurst – Hooper is leaving Atlanta for a four-year, $44 million contract in Cleveland, making Hooper the highest-paid tight end in the NFL. At one time, the Browns thought David Njoku was their answer at this position. Njoku has all the athletic ability in the world but struggled with drops throughout his time in Cleveland. Hooper will catch the ball, but if truth be told, Cleveland would have been better off using this money elsewhere.

The Falcons will replace Hooper with Hayden Hurst after trading a second-round and a fifth-round pick for the Ravens’ tight end and 2020 fourth-round pick.