As the first quarter of the season draws to a close, usage trends are starting to emerge and injuries are starting to mount, providing us with a lot to work with in DFS, so let’s go get this Week 4 shmoney.

The Chargers will be chalk; this, we know. But just because they’re chalk doesn’t change the fact that they’re the most likely team to score a boatload of points against the group of men the Saints loosely refer to as a defense. QB-RB-WR stacks are the most likely three-man stacks to combine for 75+ on DraftKings and FanDuel—higher than any stack that pairs a QB with two of his WRs.

The Saints defense has been awful this season (what else is new?), allowing 32 points per game (31st in NFL). Meanwhile, Rivers has accounted for 56% of the Chargers’ offensive TDs, while Gordon has accounted for the other 44%. Typically, the QB-RB TD split is 69-31 in favor of the QB. If the Chargers can light up the Saints for four or more TDs, there’s a good shot this stack pays off. Gordon logged 87% of the snaps last week and has gone over 20 touches in back-to-back games. More importantly for Gordon’s ceiling, he is top-three in the NFL in carries inside the 20, 10, and five-yard line. The Saints, meanwhile, allowed the RB1 (Devonta Freeman) and the RB2 (Tevin Coleman) last week. I’m not sure a defense has ever allowed two RBs on the same team to finish as the top two at their position in a given week, ever. For the aforementioned reasons, Stacking Gordon and Rivers alone makes sense, but Williams or Benjamin are cheap enough to add in while still giving you plenty of salary to work with elsewhere.

My preference is Williams because he doubles as a similarly-priced pivot off Terrelle Pryor on DraftKings, who has a solid usage-based floor, but whose ceiling may be compromised if the Redskins decide to have Josh Norman shadow him in coverage (more on that later). Williams, meanwhile, seems primed to explode. He averages 22.4 yards per catch in his career and already has two TDs on 13 career receptions. Williams also led the Chargers last week with nine targets, and has quietly amassed more red zone targets (six) than all but five other players in the league. 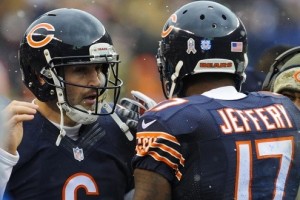 How can you play what should be a chalky Marvin Jones and still get some leverage? By combining Jones with members of the opposing team’s passing game. This scenario worked out perfectly in last week’s Packers-Lions game. After Aaron Rodgers hooked up with Jordy Nelson for two TDs in the first half, the Lions faced a huge deficit and were forced into comeback mode, affording Jones the opportunity to rack up 205 receiving yards. The winner of last week’s Millionaire Maker employed a Matthew Stafford-Marvin Jones-Jordy Nelson stack. I’m betting he knew that opposing QBs and WR1s are strongly correlated, and figured if Rodgers and Nelson went off, he could have some cash at QB by pivoting to the correlated Stafford instead.

Lions-Bears has shootout potential because the game features two of the NFL’s poorest defenses—both rank 27th or lower in DVOA. Stafford will likely be more popular than Hoyer, but Hoyer is cheaper arbitrage that proved last week he can put up numbers in comeback mode, throwing for 317 yards, 2 TDs, and 0 interceptions.

The Lions defense ranks dead last in pass defense DVOA. Jeffery has quietly been having a solid season, averaging 4.7 catches for 90.3 yards per game, but he has seen under 20% of team targets (20)—seven less than Kevin White and only two more than Zach Miller. This is a trend that likely will not hold much longer after Jeffery averaged 10.4 targets per game last season. Also, because of the Marvin Jones hype, it’s unlikely that many DFS players roster both Jones and Jeffery together, since they are similarly priced. Another thing that should keep Jeffery’s ownership in check is a matchup with Lions cornerback Darius Slay, who is a good corner, but not as good a corner as Jeffery is a receiver. As far as Jones, he has not been held below 85 yards yet this season and has already drawn 13 targets 15+ yards downfield, which are the most valuable types of targets in fantasy.

This is another opposing passing game stack that also incorporates what I think will be a contrarian play in Jones. The Falcons defense ranks 31st in pass defense DVOA and 29th in DVOA versus TEs. The Falcons have allowed the second-most targets and yards to TEs, a trend that continued from last season, when the Falcons were a bottom-five team versus the TE. Falcons cornerback Desmond Trufant tends to take away a WR or side of the field, which funnels passes to RBs and TEs over the middle or in the flat. Currently the fantasy TE1, Olsen leads all TEs (and all Panthers) in targets with 27.

Whereas I have been off Julio Jones these past few weeks as he’s been somewhat highly owned and riddled with injury, I will likely play him this week even if he’s listed on the final injury report, especially since he practiced on Wednesday after not practicing for most of last week. I expect Jones to be lightly owned after Stefon Diggs disappointed at high ownership against Carolina last week. Like Jeffery, I expect Jones to see an uptick in usage—after averaging 12.7 targets per game last season and 9.8 for his career, there’s no way he stays stuck on 6.7, the same amount as Jacob Tamme. Although Diggs disappointed last week, this Carolina defense can be beat by WRs, as evidenced by Jones’ 9-178-1 line against the Panthers in Week 17 of last season, when the team still had Josh Norman. 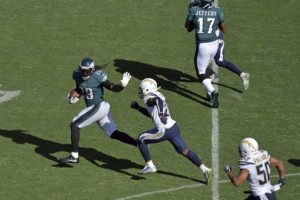 RB and defense is a correlated pairing that works best when the defense dominates, leading to clock-killing duty for the RB. RB-D/ST stacks tend to combine for 40+ FanDuel or DraftKings points when the team is a favorite (roughly two-thirds of the time), with an average spread of -2.6 on FanDuel and -3.1 on DraftKings. The Patriots opened as 3.5-point favorites this week against Buffalo, and would prefer to win on the strength of their defense and running game. Last week, the Patriots were able to do just that, as the defense pitched a shutout while Blount ran 24 times for 105 yards and 2 TDs against the Texans. The Bills got off easy last week playing Cardinals team traveling east for an early start. This week, they will have no such luck going on the road against a Bill Belichick-coached team coming off a long rest.

Terrelle Pryor will undoubtedly be a popular play this week, but he’s a player I’d consider pivoting off of in tournaments. In the fourth quarter of Week 2, the Redskins started having Norman shadow the opponent’s best WR (Dez Bryant), which continued into Week 3 with Odell Beckham. Dez and OBJ are obviously in a different league than Pryor, but shadow or not, there is a good chance Pryor sees a lot of Norman in coverage, especially since Washington’s other starting corner, Bashaud Breeland, is out. Pryor has a usable cash game floor due to his dual-threat usage, but his ceiling last week came from an 8-144 receiving line, which would be compromised if he sees a lot of Norman. I’d limit my exposure to Pryor to lineups with other members of the Washington passing game in correlated game stacks in case of a potential shootout, but that’s it. Potential pivots off of Pryor include the aforementioned Tyrell Williams, as well as Gary Barnidge, who showed some rapport with Cody Kessler last week and who may be able to benefit from the Redskins’ cover-two scheme that tends to leave the deep middle open.

With Langford on the shelf, unproven fifth-round rookie Jordan Howard out of Indiana should get a chance to carry the load for Chicago. Last week, the 6-foot, 230-pounder played 75% of the Bears’ snaps and amassed 92 yards on 13 touches, including six targets and four receptions. Touch volume correlates with RB fantasy production more than any other measure, and Howard has a chance to see 20 touches, which is important since from 2013-15, 80% of top-six RB scorers on FanDuel and 79% of top-six RB scorers on DraftKings handled the rock at least 20 times. The Lions rank 27th in run defense DVOA, 28th in defensive adjusted line yards (4.40), and dead last in yards per carry allowed to RBs (5.31).