This article is part of a new series in which we will examine winning tournament strategies from top tournament players. We’ll focus on how you can use RotoGrinders Premium tools to replicate the concepts and strategies deployed by some of the best GPP minds.

Today’s contributor is Jordan Cooper, better known as blenderhd on DFS sites. As a believer in the game theory side of daily fantasy, he seeks to focus on exploiting biases by the field rather than emphasis analytics research when making GPP decisions. This strategy has produced multiple large-field GPP wins, including a first-place prize of $20,000 this past Friday on DraftKings. We asked Jordan to talk about how he uses the tools at RotoGrinders to attack these large tournaments by leveraging ownership inefficiencies and embracing variance.

This week’s edition is FREE to all. You can access the tools and resources described below via a RotoGrinders Premium Membership. 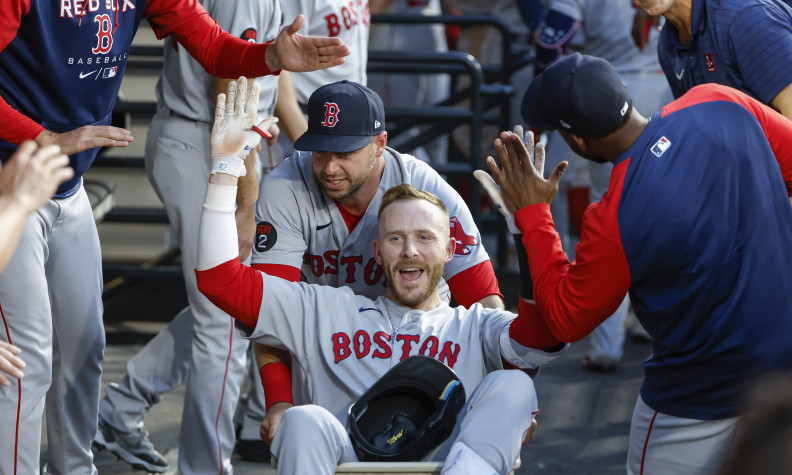 Baseball is one of the most statistically driven sports on the planet. Between wOBA, ISO, wRC+, FB%, SwStr% and the myriad of 100+ other individual and team metrics, all with their own funky acronyms, it can be a daunting task for any DFS player to pore over on a daily basis to find the “best” plays. While useful to find interesting inflection points in a given matchup, most of these figures are based on data accumulated in large sample sizes.

Over a 162-game season, we can reasonably expect player performances to normalize by year’s end, but daily fantasy MLB is only about one day’s results. The span of only 4-5 at-bats. The span of only 5-6 innings pitched. The best hitter in the best matchup statistically can easily go 0-for-5. The best pitcher in the best matchup statistically can easily give up 5 runs in the first inning. They’re not high probability outcomes, of course, but the variance in these outcomes is widely and dramatically underestimated by the majority of those playing DFS.

Embrace this variance. Exploit the fact that the majority of the field in GPPs doesn’t. Because MLB player outcomes on a given single night of games can easily be contradictory to the underlying large sample statistical elements, I don’t weight them as much as others inevitably will when researching a slate. In fact, since this statistical information and analysis is readily accessible to the masses these days in 2019, it can actually cause certain players to go over-owned for their probabilistic expectation. This is the name of the game in large-field GPPs shooting for a first-place finish – finding the disparities between ownership and expectation in a sport where outlier outcomes are much more likely than people think.

If you’re not stacking, you’re not winning. The correlative effects of hitters knocking runners in, giving higher scoring potential at-bats to those following them, allows you to exponentially increase the upside of your lineups. It is also much easier from a probabilistic standpoint to rely on fewer events to occur than to parlay more non-correlative events together (ie. trying to pick out 8 individual home runs amongst 13 different games). While we sometimes do see these non-stacked lineups on top of GPPs, the highest first-place equity in the long term will belong to stacks, and specifically 5-man stacks. It’s one of the things that’s shown virtually every day here at RotoGrinders in SlateIQ:

This also highlights the inefficiency of most GPP fields simply in construction type. Your opponents don’t stack enough. This is why I now almost exclusively play 5-man stacks in large-field GPPs on DraftKings main slates (~8 games or more).

But how do I choose these stacks? Well, with most hitters on a given night getting a reasonably similar number of plate opportunities, and the range of outcomes wider than people believe, I tend to assess stacks using the three Ps – price (combined player salaries), position (number of different slots), and potential (implied team run total & ownership). An overview of most of this information is available in LineupHQ in the ‘Build Rules’ section under ‘Hitter Stacks’: 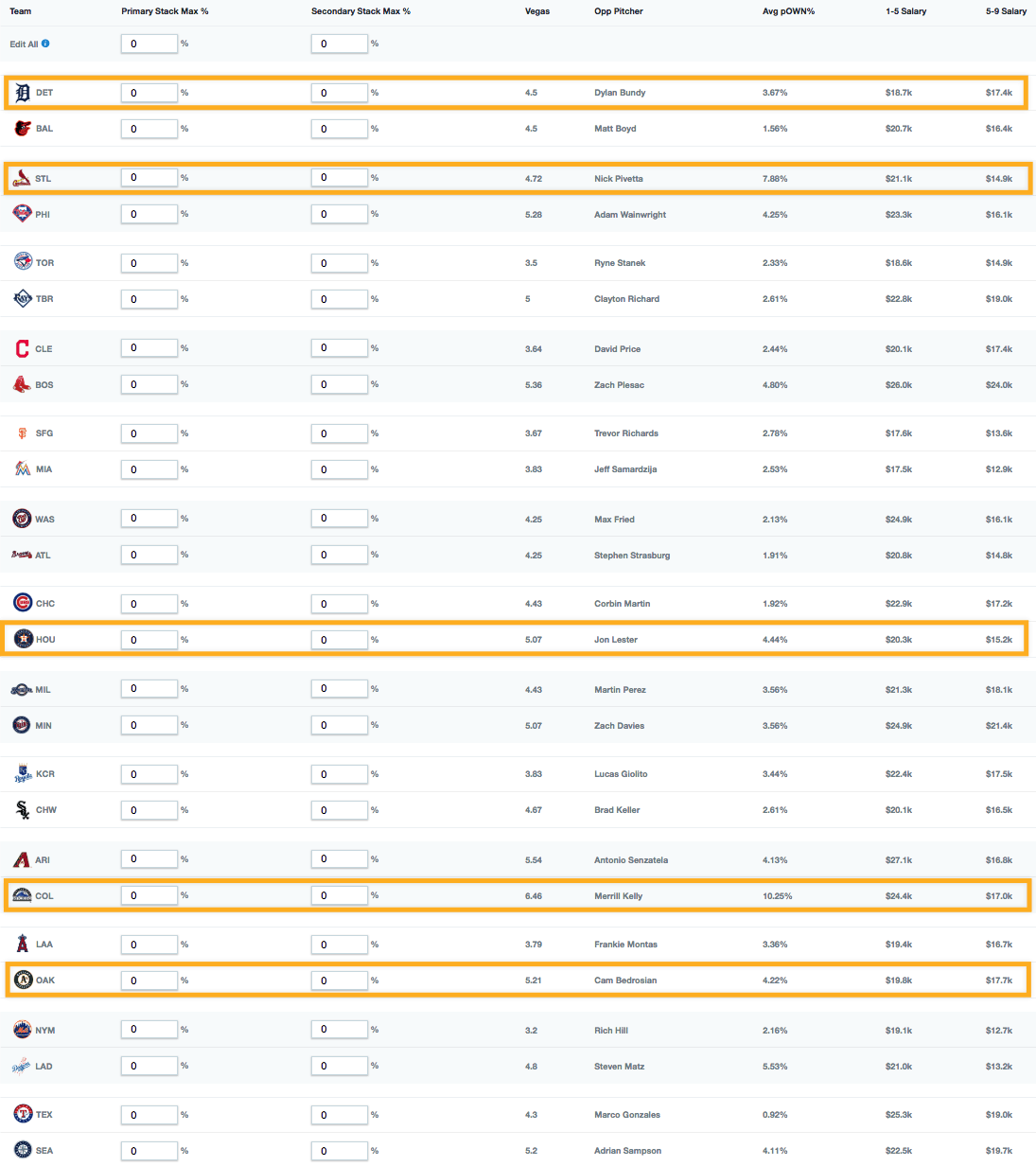 From this, I can get a general sense of team stacks that may be underpriced or overpriced in comparison to their implied run total. It helps me identify what stacks are best in play depending on my SP selections for the slate. The more expensive pitchers will most likely require the use of a cheaper stack, while paying down for both SPs will allow the use of a more costly stack. It also gives me a glimpse at the current projected ownership average of the stacks themselves for leverage opportunities (which I will cross-reference in SlateIQ a little bit later).

Now that I’ve created a shortlist of potential stacks, it’s prudent to take a closer look at the batting orders and specifically the positions of the players on these teams. The more positional slots that the players can occupy without overlap in a stack, the easier it will be to make multiple permutations of these stacks and fit 2-3-man stacks of other teams around them.

Also, the scarcest positions for reliable production is usually at catcher and middle infield (2B/SS). This is why I prefer filling these slots, if reasonably possible, as part of the 5-man stack. Even if these hitters may be lightweights or have a poor batting order on the team, the correlation of the stack (by having more runners on base when at-bat and/or getting more at-bats in general due to rallies) will increase their upside potential for your lineup than taking a similar player from another team as a one-off to fill that positional slot.

The OAK lineup presents the easiest way to fill SS and 3B with Marcus Semien batting leadoff and Matt Chapman third in the order. From there, I can choose three of Robbie Grossman, Matt Olson, Stephen Piscotty, and Mark Canha to fill 1B and two OF spots for a solid top of the order stack. However, this may not be the optimal approach. While batting at the bottom of the order, it may be better to fill either 2B or C with Jurickson Profar or Nick Hundley since the positions may be scare elsewhere. I could definitely see using both types (1-3-4-5-7 and 9-1-2-3-4) to capture these positions better amongst all of my lineups.

The HOU lineup provides a minimum priced Jack Mayfield at 2B/SS which, as a scare middle infield slot, I’d consider to be the core building block of any Astros stack. You can easily fill a multitude of slots around him with Alex Bregman at 3B, Carlos Correa at SS, Yulieski Gurriel or Tyler White at 1B, and either Josh Reddick or Michael Brantley at OF. 2-3-4-5-6 seems like the most straight forward 5-man stack approach, but I will likely throw in a few ones that capture Garrett Stubbs at C batting eighth due to positional scarcity.

The STL lineup may be difficult to stack optimally simply due to the C and 2B batting down in the order with the pitcher following in the nine hole. A top of the order stack of 1-2-3-4-5 is still definitely in play to fill 1B with Paul Goldschmidt, SS with Paul DeJong, 3B with Matt Carpenter, and OF with Dexter Fowler and Marcell Ozuna. A friskier approach that I may have a lineup or two of could capture Yadier Molina and/or Kolten Wong with something like 2-3-4-5-7 or 8-1-2-3-5.

The DET lineup, despite being extremely cheap, may be the toughest to stack altogether without severely limiting your options elsewhere. The top four batters, Niko Goodrum, Christin Stewart, Nick Castellanos, and Miguel Cabrera are just OF or 1B eligible. Regardless of how you stack the Tigers, Ronny Rodriguez at 2B/SS looks like a building block batting right in the middle of the order in a scarce middle infield position. 1-2-3-4-5 would take up all your outfield slots, so unless you’re extremely bullish, I wouldn’t recommend this approach. It makes more sense to leave at least one of these OF eligible players off the stack and possibly capture C with Grayson Greiner in the process with something like 3-4-5-6-8 or 5-7-8-1-2.

The COL lineup provides a very expensive SS in Trevor Story batting second. Because I prefer to have middle infielders or catchers as part of a stack, rather than using light hitting players as one-offs in my lineups, I consider Story to be a building block of any Rockies stack I make. You can fill 3B with Nolan Arenado, 1B with Daniel Murphy, OF with two of Raimel Tapia, David Dahl and Ian Desmond. A top of the order stack of 1-2-3-4-5 is quite easy to make. I will likely also make several lineups that include Ryan McMahon at 2B or Chris Iannetta at C with something like 8-1-2-3-4 or 2-3-4-5-6.

The final piece of the puzzle in determining which teams I decide to stack tonight is leverage. As I discussed in the beginning of this piece, the key to building lineups with the highest first-place finish equity, especially in a high variance sport, is exploiting the disparity between ownership and probabilistic expectation. What team stacks will be more owned or less owned than their likelihood of being in the winning lineup? The goal for my GPP lineups is not about rostering stacks that are the most likely to do well in a vacuum on a given slate, but simply lineups that are positive expected value versus the field.

This is where SlateIQ becomes an invaluable part of my research, as it uses years of past results in similar slate types to project these stack expectations. Updated throughout the day as starting lineups, player projections and ownership projections change, it can be one of the best ways to determine if the stacks I’m attacking are providing the leverage that I’m seeking in large-field GPPs. 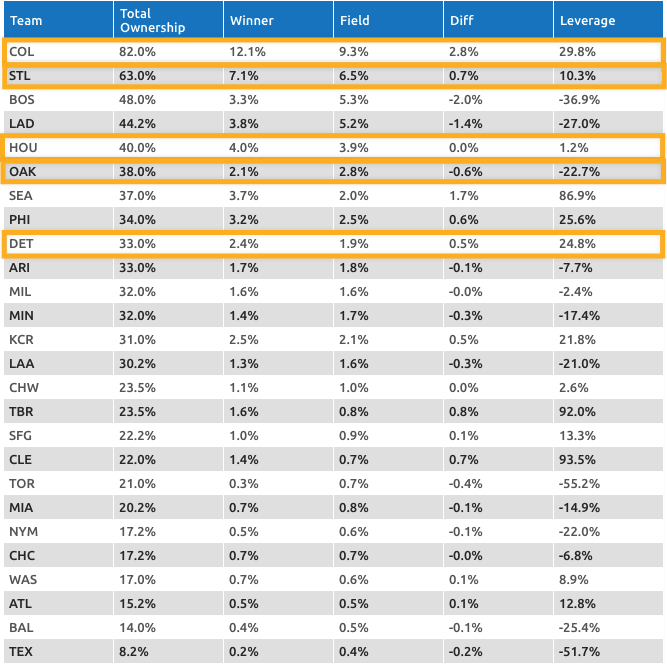 From the looks of this, nearly all of the stacks I’ve highlighted are both towards the top end of expectation as well as being leveraged against the field (OAK as the only one that has a lower expectation than projected ownership). It’s interesting that even though COL has both the highest expectation and the most popular, SlateIQ still shows that the Rockies tonight may not actually be stacked enough in GPPs. If ownership shakes out at these levels by the late afternoon, maybe I’ll end up going much more overweight on them than I originally planned (since most days I tend to fade the highest implied run total team on the board due to over-ownership).

In any public market such as DFS contests, it is usually profitable to arbitrage the strategies less people utilize against the information that is already widely accessible. Since the majority of MLB DFS players rely too heavily on median figures from large sample data sets to make their decisions, it’s possible to build +EV lineups for GPPs without the use of much of these statistics simply by playing daily fantasy as more of a game/puzzle better than your opponents. Incorporating tools such as SlateIQ into your process, as I do, could definitely allow you to view MLB DFS from a different viewpoint and be more consistently successful going forward.