I hope you enjoy it, and I hope it helps you think about today’s MLB plays in a new way as you build your DFS lineups. Here are 10 Notes for Friday, August 30th.

This is it! With football kicking in, this is the final 10 Notes of the 2019 MLB season. I wanted to offer a quick and sincere thanks to everyone who’s followed along this year. I love writing these, and I hope they’ve been as fun to read as they’ve been to write. Best of luck for the rest of this MLB season, and I’ll see you all next season!

1. Shane Bieber has struck out a half dozen or more batters in 14 consecutive games; that’s just one shy of the Indians franchise record, set by Sam McDowell in 1966-67. Among Indians greats who never struck out 6+ in 15 straight: Corey Kluber (longest streak is 14 games), Trevor Bauer (14 games), Bob Feller (14 games), Carlos Carrasco (10 games), C.C. Sabathia (8 games). Bieber has fully broken out and has already entered rarified territory in terms of strikeouts, which makes it no surprise that he’s the highest-priced pitcher on Friday’s main slate. The matchup is fairly neutral, in terms of strikeouts, with the Rays striking out at a roughly league average 22.7 percent clip against righties. From a run prevention standpoint, though, Bieber should do well at pitcher-friendly Tropicana Field. He’s been much better away from his home park of Progressive Field for his career (4.43 ERA at home; 3.13 on the road). At first glance, it’s easy to wonder where all the upper echelon aces are on Friday’s slate, until you look closer and realize that Bieber has been just that this season. He’s the clear top option on Friday if you’ve got the funds.

2. The only real challenger for Bieber to the title of best option on Friday’s slate is Aaron Nola, who has at least 25 percent strikeouts and 49.8 percent ground balls in each of the last four seasons dating back to 2016; only one other pitcher (Lance McCullers) in MLB has two such seasons over that frame. Nola isn’t top-of-MLB in either category, but he consistently combines very good strikeouts with plenty of grounders, a skill set that has led to him being one of the most consistent pitchers in MLB. It’s a skill set that makes him “safe.” Where Bieber has upside for double-digit strikeouts, you can be pretty sure that Nola isn’t going to put up a total dud, especially considering how he’s owned the Mets as of late, posting 21.9+ DraftKings points in four of his last five contests against the Metropolitans. It’s a fairly average matchup for Nola without immense upside, and it’s a little tough to see him outscoring Bieber, though his floor is as high as any pitcher’s on the slate. 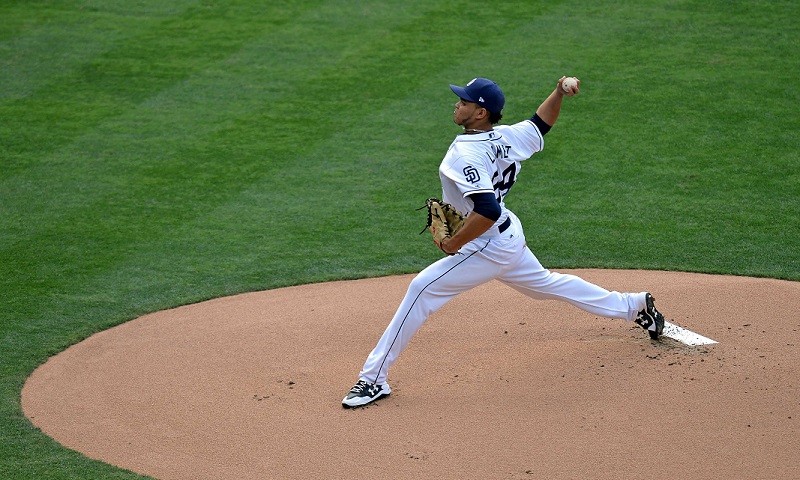 3. Since Dinelson Lamet is one of the most interesting pitchers in MLB, here are a few interesting (and quick) reasons he’s worth considering in a matchup against the Giants on Friday:

— He’s posted a 30.2 percent strikeout rate and generated 13.8 percent swinging strikes since returning on July 4th; that makes him just one of 10 pitchers in MLB with that combination over that span.

— He’s getting an insane 23.3 percent swinging strikes on his curveball (a pitch he uses 31.7 percent of the time); that’s best of the 63 pitchers who have thrown at least 100 curves since July 4th.

— In his August 6th start, he got 41 called strikes plus whiffs;

The guy just oozes upside, and while he’s priced up with the big boys at DraftKings ($10,700) – way too high considering the unlikelihood of his pitching deep into the game – Lamet is still priced reasonably at FanDuel ($8,200) and Yahoo ($37), below no-upside guys like Wade Miley and Marco Gonzalez. He’s an awesome boom-or-bust tournament play, particularly at those two sites.

4. The last time Madison Bumgarner allowed more than three earned runs at home was way back on April 26th. Bumgarner has always loved pitching in his home park, and if we use a three-year sample dating back to 2017, he’s one of only six pitchers (min. 200 IP) with a sub-3.00 ERA and a 1.00 WHIP or below at home, joining Kluber, Verlander, Scherzer, Kershaw, and Snell on that list. This year, Bumgarner has an impressive 2.95 ERA, 25.7 percent strikeout rate, and .252 wOBA allowed in Oracle Park, and he should be able to keep it going in a decent matchup against the Padres. While the Padres are much better suited against left-handed pitching (their 104 wRC+ actually ranks in the top 10 in MLB), they still fan at a high 24.4 percent clip. Bumgarner feels a bit like Aaron Nola on this slate: high-enough floor, but capped upside, and a price tag across the industry ($10,200 at DraftKings; $9,200 at FanDuel; $48 at Yahoo) where a bit more upside is needed. Given his historic success in his home park, though, he’s a “safe” play who should have no trouble posting a quality start with 5 or 6 punchouts.

5. Kyle Gibson is not a great pitcher. But he does have a pretty good slider, and that alone could portend big things for him on Friday in a matchup with the Detroit Tigers. The Tigers rank dead last in MLB in wOBA against right-handed sliders (.237), which shouldn’t really be all that surprising since the Tigers rank close to last in pretty much everything against right-handed pitching. Just look at the DraftKings point totals they’ve allowed to some less-than-elite (to put it kindly) right-handed starters in the last month alone:

You’d like Gibson to be a bit cheaper at DraftKings, where he’s $9,500, but his $8,400 FanDuel price tag and his $33 Yahoo asking price are much more palatable. As with a few others I’ve written about, Gibson doesn’t necessarily bring massive upside, but massive upside at pitcher is tough to find on Friday. I’ll take a pretty good pitcher, with a great out pitch, getting a ballpark boost, against one of the worst offenses in baseball. 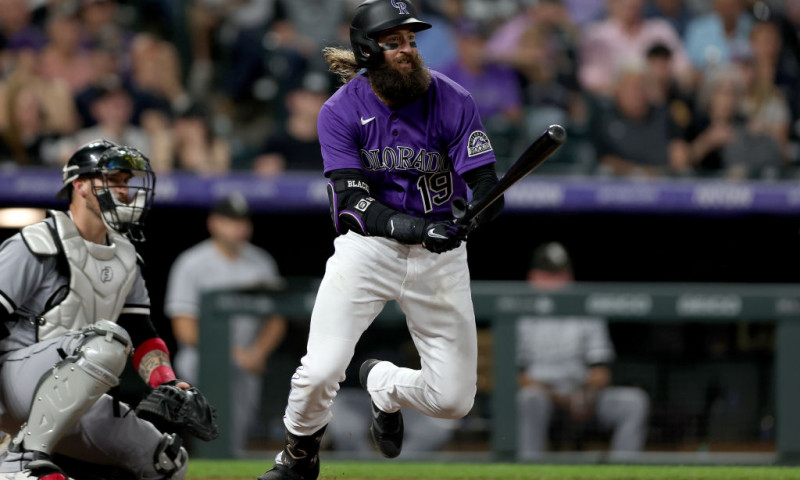 6. How good is Charlie Blackmon at Coors? He’s got 36 games of 3+ hits there since 2017; that’s eight more than second-place Andrew Benintendi, and the same number as J.D. Martinez and Jose Ramirez (two pretty, pretty good hitters) have combined over that span. He’s just murdering the ball there this year, with a 1.244 OPS that currently is 18th-best by a hitter at home since 1908. On Friday, Blackmon and the Rockies take on Pirates rookie right-hander Dario Agrazal, a pitcher whose 11.9 percent strikeout rate ranks – get ready – 346th of the 348 pitchers with 40 innings pitched this season. In other words, the Rockies are going to be putting the ball in play a whole bunch, and it all starts with Blackmon. More than even Nolan Arenado or Trevor Story, I want Charlie Blackmon at home with the platoon advantage as the first bat in my cash game lineup.

7. Alex Bregman has a .386 ISO this month…with a 7.8 percent strikeout rate. Here is the complete list of players who have done that in any single month since 2002: Jose Ramirez (twice), Albert Pujols (three times), Chipper Jones (once), and Barry Bonds (six times). Bregman has been scorching hot, and with a good matchup against Toronto’s Trent Thornton (.342 wOBA allowed to RHBs this year), Bregman makes for an interesting pivot off the likely massive ownership of Nolan Arenado and Trevor Story. If what we’re looking for in cash games are players who put the ball in play often, raising their floors, Bregman provides that, and the power is just a bonus.

8. Since 1908, there have been 25,163 instances where a pitcher has thrown 49 innings in a season; of those 25,163, Edwin Jackson is one of only four pitchers to allow three home runs per nine innings. Hello, Minnesota Twins. Jackson has been abysmal, and he just can’t seem to keep the ball in the park. The Twins, for their part, lead all of MLB with 258 home runs. Even in Comerica Park, a park not known for being power-friendly, the Twins should be able to put up plenty of runs against Jackson and a bullpen that boasts an MLB-worst 4.73 SIERA. For good reason, everyone will be flocking to the Rockies, and Yankees, and Astros, and Pirates on Friday. The Twins could fly a bit under the radar, and there’s plenty of power upside given the matchup with the somehow-still-employed-by-a-Major-League-team Edwin Jackson.

9. DJ LeMahieu has a .374 batting average against ground ball pitchers since the start 2016; that’s best in MLB (min. 200 PA), just ahead of Mike Trout (.361). We already know about how LeMahieu mashed lefties this year (his .475 wOBA trails only J.D. Martinez among qualified hitters), and now he gets a ground ball pitcher and a lefty in the A’s Brett Anderson. It always felt weird spending up on LeMahieu when he was at Coors as a member of the Rockies, and now that he’s not even in Colorado, it feels really weird. But it’s time we took LeMahieu seriously as a high-floor, moderate-upside guy who should never be left out of Yankees stacks. (And while we’re at it, let’s roster Gleyber Torres, whose .255 ISO against ground ballers ranks 14th since 2018).